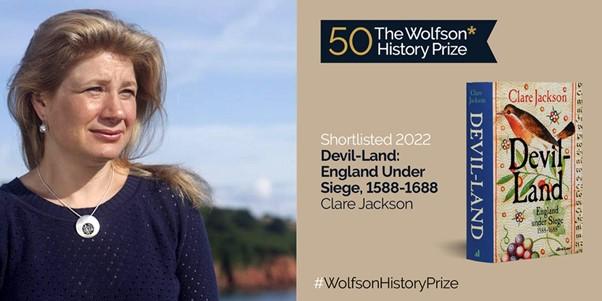 The shortlist for the Wolfson History Prize 2022, the most valuable non-fiction writing prize in the UK, was announced on 21 April, recognising the best factual history writing from the past year. Dr Clare Jackson, Senior Tutor and Walter Grant Scott Fellow in History at the University of Cambridge, and Fellow of Trinity Hall, was nominated for Devil-Land: England under Siege 1588-1688.

Devil-Land tells the story of one of the most turbulent centuries of English history as seen by foreign observers.

‘I’d hope that the account presented in Devil-Land shows that, four centuries before Brexit, seventeenth-century England’s relations with its Continental neighbours was characterised by contingent mutability, together with recurrent fears of foreign influence, interference and even invasion,’ Dr Jackson said. ‘Meanwhile, seventeenth-century Britain was itself an unstable multiple monarchy and ruled by Stuart monarchs who were regarded by many of their English subjects as members of a foreign dynasty, who could not be securely relied on to act in England’s national interest.’

The Wolfson Judges called Devil-Land ‘A masterpiece that will change our view of the 17th century. Exciting and well-written, it provides fresh insights by looking at England through European eyes.’

The winner will be announced on Wednesday 22 June in a ceremony at the Wallace Collection, London.

Asked about her reaction to the good news, Dr Jackson replied: ‘I was thrilled, deeply honoured – and very grateful to the Wolfson Foundation for recognising writing that, over the past fifty years, has combined academic scholarship with accessibility to a broad historical readership.’

To mark the fiftieth anniversary of the Prize, the winner of the Wolfson History Prize will receive an increased award of £50,000, with each of the shortlisted authors receiving £5000.

The Wolfson History Prize 2022 shortlisted authors will discuss their books and historical writing in a special edition of BBC Radio 3’s Free Thinking in June.

For more, read the announcements from the University and Trinity Hall.