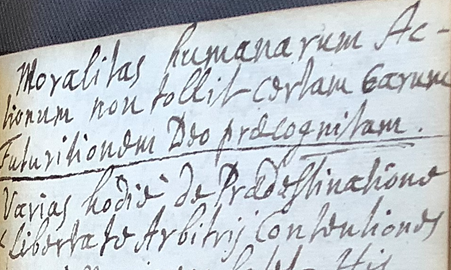 The discovery of a manuscript notebook, lost for almost three hundred years, containing letters to John Wickins from his 'ever-loving Chamberfellow' Isaac Newton, sheds light on Newton's career at Trinity College, Cambridge, in the 1670s.

The manuscript, purchased by the Cambridge University Library in March 2021, also contains the text of Newton's reply at the Divinity Act in 1677 to the question whether 'the morality of human actions does not preclude God's certain foreknowledge that they will come to pass'.

Newton's response represents his earliest datable theological composition and considers sources and topics to which he would return in a long career of original religious writing. Letters in the manuscript show Newton and Wickins discussing both theological sources from the library at Trinity and the building of a two-foot reflecting telescope. Wickins, who copied Newton's writings into the notebook, had earlier acted as Newton's scribe in extensive correspondence over his optical discoveries with the Royal Society and Continental scholars.

Scott Mandelbrote, editorial director of the Newton Project and fellow of Peterhouse, identified the manuscript and its contents for the University Library and will be editing it with Dmitri Levitin.