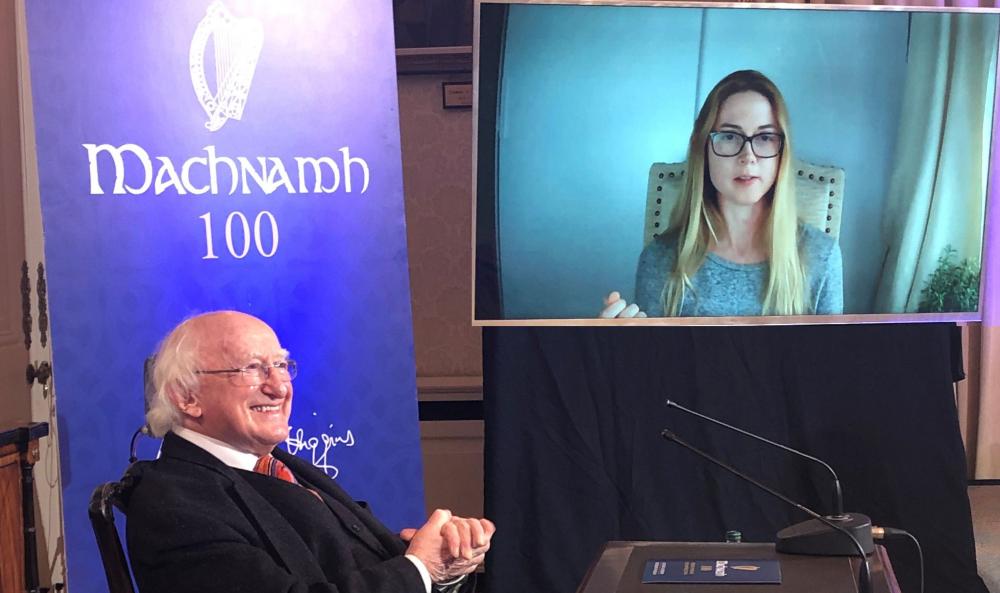 A Fellow of St Catharine’s, Dr Niamh Gallagher (2009), is participating in a public seminar series inaugurated by the President of Ireland, Michael D. Higgins, on Thursday 25 February, to discuss aspects of the centenary Ireland is currently undergoing.

The 1919-21 War of Independence was a guerrilla-style conflict between Irish Republicans, who demanded independence from Britain, and the British Army. In December 1921, after months of negotiations, a treaty was agreed between Irish and British representatives. It created the Irish Free State, a 26-county entity which became a dominion within the British Empire. The Anglo-Irish Treaty effectively formalised the partition of Ireland, which the Government of Ireland Act (1920) had decreed. The Treaty sparked a civil war in Ireland over its terms while the permanency of partition created new realities that haunted the twentieth century.

President Higgins has inaugurated a seminar series to contemplate these difficult events and has given it the name Machnamh 100, an ancient Irish concept encompassing reflection and contemplation. The series will involve historians who have a diverse array of perspectives on the events of one hundred years ago and President Higgins hopes that it will promote greater understanding of the shared history within and between Ireland and Britain. The President has written elsewhere that ‘through respecting differing perspectives in all their complexity, we can facilitate a more authentic construction, not only of our intersecting shared history, but of our post-sectarian possibilities for the future.’

Dr Gallagher was invited by the President to take part in the second of the seminar series, the theme of which is ‘Empire: instincts, interests, power and resistance.’ The main reflection will be given by Professor John Horne, Trinity College Dublin, who will provide an overview of the international context of the events in 1920s Ireland, the postwar collapse of European empires, and the British Empire at the end of the war and beyond. Dr Gallagher will join President Higgins, Professor Eunan O’Halpin (Trinity College Dublin), Dr Marie Coleman (Queen’s University Belfast), and Professor Alvin Jackson (University of Edinburgh) in responding to Professor Horne's paper.

The discussion will be broadcast at 7pm on Thursday 25 February on RTÉ Player. Tune in at the appropriate time via this link.

“President Higgins’s initiative is an important one. Ireland has successfully dealt with recent centenaries such as the 1916 Easter Rising in a spirit of inclusiveness and openness, but the island is now entering a more difficult phase of commemorations. The President’s desire to look at the contested theme of empire will enable Irish and British people to think more critically, and contemplatively, about a wide range of issues pertaining to these islands and the countries that were once within the British Empire. I intend to speak about the First World War, some lesser-known aspects of Irish involvement in the British Empire, and my own views on how history might assist the process of marking the centenaries through which Ireland and N. Ireland are now undergoing.”
Dr Niamh Gallagher