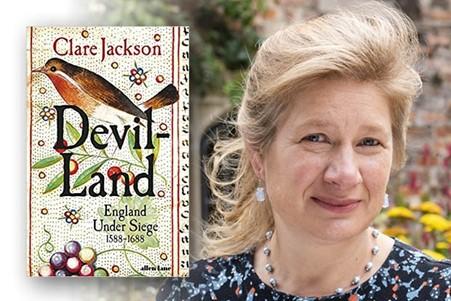 Clare Jackson’s Devil-Land: England under Siege 1588-1688 (Allen Lane) has won the 2022 Wolfson History Prize. Now in its fiftieth year, the Wolfson Prize honours outstanding history writing. It is the most valuable prize for non-fiction in the UK.

Devil-Land offers a gripping reassessment of one of the most turbulent centuries of English history as seen by foreign observers. As noted by the prize announcement, Dr Jackson’s book “reveals England as, in many ways, a ‘failed state’: endemically unstable and rocked by devastating events from the Gunpowder Plot to the Great Fire of London.”

'A masterpiece that will change our view of the 17th century. Exciting and well-written, it provides fresh insights by looking at England through European eyes.’

Dr Jackson, a Senior Tutor and Walter Grant Scott Fellow in History at the University of Cambridge, and Fellow of Trinity Hall, received the award at a ceremony at the Wallace Collection in London on 22nd June.

‘I’m delighted and deeply honoured to have won the Wolfson History Prize which recognises historical writing that combines academic scholarship with accessibility for a broad readership,’ Jackson said. ‘It’s thrilling to join the hugely distinguished list of previous Prizewinners and to share in the celebrations of the Wolfson History Prize’s special 50th anniversary year. I’m so grateful, not only to the Wolfson Foundation, but also to my publisher Allen Lane and colleagues, friends and family for so much support and encouragement.’

To celebrate the fiftieth anniversary, the award was increased to £50,000 this year.

A Cambridge historian last received the Wolfson Prize in 2020, when the award went to Professor David Abulafia’s The Boundless Sea: A Human History of the Oceans.