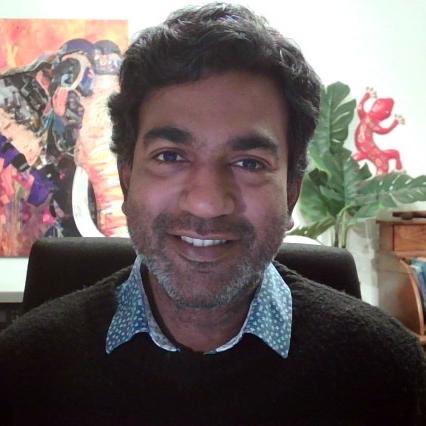 My work is in world history, especially of the eighteenth and nineteenth centuries.

The first academic appointment I held was as a Research Fellow in History at Gonville and Caius College (from 2001); I then served as a lecturer at the college for a few years as a College Teaching Officer, supervising across the span of the world history papers. Next, at the London School of Economics, I held a Lectureship in South Asian History. I arrived back in Cambridge in 2010 and was appointed Professor of World History in 2019. I also direct the University's Centre of South Asian Studies.

I have served as a Visiting Professor at the Ecole des Hautes Etudes en Sciences Sociales (EHESS), Paris and as a Visiting Senior Research Fellow at both the Asia Research Institute of the National University of Singapore and the University of Sydney. I was the Sackler Caird Fellow, 2015-7, at the National Maritime Museum, Greenwich. In 2012 I was awarded a Philip Leverhulme Prize for History. In 2022-3, I will be a Visiting Professor at the Käte Hamburger Centre for Global History at LMU, Germany.

I gave the Royal Historical Society's Prothero Lecture in 2019 and the University of Edinburgh's Fennell Lecture in 2018. I regularly speak to public audiences and school audiences and have spoken, for instance, at the Hay Festival, the Jaipur Literary Festival and the Cheltenham Festival. In 2022, I will be giving the annual lecture of the Royal Asiatic Society, London, a keynote at the University of Jaffna, in northern Sri Lanka in the country's former war zone, and a Lady Margaret Lecture at Christ's College, Cambridge.

My new book Waves Across the South: A New History of Revolution and Empire is an experiment in critically repopulating a long-standing label of Euro-Atlantic historiography, 'the age of revolutions', from the global oceanic South. It moves across a series of small seas in the Indian and Pacific oceans from c.1790 to c.1850, arguing that in these sites the age of revolutions was about indigenous presence, conflict, assertion, resistance and organisation followed by counter-revolutionary British imperialism. It also centres small islands which have often been marginalised in broader narratives of world history.

I will continue to develop this work in oceanic history and across the Indian and Pacific Oceans, in a collaboration with Prof. Martin Dusinberre of the University of Zurich. Our funded research project is titled, 'North-South Engagements between Asia and the Southern Seas.' It seeks to recover a series of exchanges, migrations and modes of conflict between mainland Asia and the southern seas. This collaboration will see exchanges of students as well as online workshops.

After initial work on elephants in South Asia, I continue to work on histories of the human and the animal and one recent short think piece sought to provide a longer chronology of the inter-related histories of the covid-19 pandemic and the environmental crisis. This piece, 'The Animal, Human and the Prehistory of Covid-19', tracks this inter-relation by thinking with the pangolin. Relatedly, I also am interested in the future direction of world history and am writing on how to conceive of it in more materialist terms. This picks up on my recent piece, 'Materialities in the Making of World Histories' and will lead into a couple of papers on using environmental objects to organise world histories and also what a less 'global' and more 'Earthy' historiography might look like. It also represents an outworking of my writing in the history of science.

Though I grew up in war-time Sri Lanka, I was not physically affected by the conflict. I was born into a family which crossed the ethnic divides of the island and the national territories of Sri Lanka and India. For this reason, I was educated strictly in the 'Sinhala medium' until 1992. My Sri Lankan heritage has undoubtedly affected the broader research questions that I interrogate in my work. These include the status of differentiation, classification and territorialisation in global and imperial structures and the specific material and environmental contexts that shape such practices and structures. I expect my research to return to Sri Lanka. However, I am not plotting a book at the moment: I am reading and thinking for now. I will be on sabbatical leave in 2021-2.

The Part II Specified Paper, Paper 30 ''Islands and Beaches'': The Pacific and Indian Oceans in the Long Nineteenth Century', closely mirrors present research interests. Together with Dr. Melissa Calaresu and Professor Peter Mandler, I also teach on the Themes and Sources paper, 'The History of Collecting'; this represents a long-term commitment to teaching in museum settings.

I supervise MPhil and PhD students working in the broad field of world and imperial history and is especially interested in transregional projects. Please get in touch if you would like to discuss potential post-graduate research.

Director, Centre for South Asian Studies at the University of Cambridge.

President, The Pacific Circle, a scholarly society for research on the history of knowledge in the Indian and Pacific Oceans.

The Vice Chancellor's Advisory Group on the Legacies of Enslavement.

Director of Graduate Studies in the History Faculty, Cambridge, 2018-20.

I was co-editor of The Historical Journal over a four year term and continue to serve on the editorial board.

I am a co-convenor of a new research seminar at the Institute of Historical Research on Anthropocene Histories.

I was one of the authors of the RHS report and resource on racial and ethnic inequality in the UK drawing on a survey that generated in excess of 700 responses from historians across the UK and co-chaired the working group which produced the report. I also served on the Royal Historical Society Council.

I was the Principal Investigator on an AHRC-funded grant which he held together with Prof. Simon Schaffer of HPS, Cambridge with the title 'Exploring Traditions: Sources for a Global History of Science.'

On the editorial boards of Past and Present; History Australia; The International History Review; Medical History. Have served as Associate Editor of Journal of British Studies.