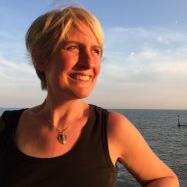 I studied History at Cambridge, took a Master's in Renaissance Studies at the Warburg Institute, and completed a PhD on early modern nuns at the University of Leicester. I've been a lecturer here at Cambridge since 1997 and am a Fellow of Jesus College.

I was one of the curators of two recent exhibitions at the Fitzwilliam Museum: Treasured Possessions from the Renaissance to the Enlightenment and Madonnas and Miracles: The Holy Home in Renaissance Italy.

My work is grounded in the social and cultural history of early modern Italy and Europe, and I have particular interests in religion, gender, sociability, and material culture. My first book, Virgins of Venice, explored the experience of women living in convents at the time of the Counter-Reformation. Published by Penguin, and translated into seven languages, it was awarded the 2002 John Llewellyn Rhys prize. My second book, Mission to China: Matteo Ricci and the Jesuit Encounter with the East emphasises the importance of miracles, gifts and friendship to the Jesuits' mission. Awarded a Leverhulme Major Research Fellowship for the period 2011-14, I embarked on a new project: ‘Objects of Devotion: The Material Culture of Italian Renaissance Piety’. I was one of the Principal Investigators of an interdisciplinary project, funded by the European Research Council: 'Domestic Devotions: The Place of Piety in the Renaissance Italian Household'. This led in 2018 to the publication of a co-authored book, The Sacred Home in Renaissance Italy, which was awarded the Bainton History / Theology prize.

My current doctoral students are working on Convent Women and Strategies of Self-Formation in Renaissance Tuscany, Religious Exiles from Sixteenth-Century Italy, Fertility and Devotion in Late Medieval England (co-supervised with Carl Watkins), Language Encounters in Seventeenth-Century North America, Old Age in Early Modern Northern Italy, 'Everyday Humanism' between the Aegean and Italian peninsula, ca. 1566–1669, Devotion and the Senses in the Savoyard Borderlands and Co-Translation in Late Ming China (co-supervised with Dror Weil). They are funded by a Gates Studentship; Cambridge European Scholarships; the AHRC and a Cambridge Trust CSC International Scholarship.

My undergraduate lectures tackle many aspects of early modern Europe, including the Renaissance, religious reform, encounters with non-Christian religions, and gender. More specialized courses for Part II students include 'Material Culture in the Early Modern World' and a special subject on 'The Culture of the Miraculous in Renaissance Italy'. I am a convenor of the Early Modern World History Seminar and Workshop. I am centrally involved in the MPhil in Early Modern History and regularly contribute to the teaching of visual and material culture.

I greatly enjoy collaborating with colleagues in History and other disciplines. I am a convenor of the Cambridge Italian Research Network, which brings together scholars working on all aspects of Italy, past, present and future; in 2014, I shared a Mellon-CRASSH Teaching Fellowship with Alex Marr (History of Art); and - together with Victoria Avery, Melissa Calaresu and Ulinka Rublack - I curated the exhibition, Treasured Possessions at the Fitzwilliam Museum in 2015.  Our ERC research project, Domestic Devotions, straddled two schools and three departments; in 2017, we participated in another very successful collaboration with the Fitzwilliam Museum, the exhibition entitled 'Madonnas & Miracles: The Holy Home in Renaissance Italy'.

Among my other professional responsibilities, I have served as external examiner at the University of Malta, UEA and Birkbeck; as elected Discipline Representative for History in the Renaissance Society of America; and as a member of the AHRC peer review college. I am a Syndic of the Fitzwilliam Museum and a member of the Hamilton Kerr Institute Advisory Council.

I have given plenary lectures at the Renaissance Society of America, the Society for Italian Studies and the Reformation Studies Colloquium, and have spoken at the Hay Festival, Salisbury Festival and Cambridge Wordfest.