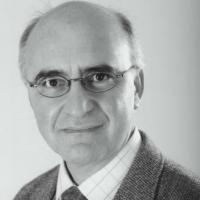 Eugenio Biagini is an alumnus of the Scuola Normale Superiore di Pisa. He first came up to Cambridge (at Sidney Sussex) in 1985, before becoming a Junior Research Fellow at Churchill College in 1987. After spending two years at the Department of History of the Newcastle-upon-Tyne, he became an Assistant Professor of Modern British History at Princeton. In 1996 he came back to Cambridge as a College Lecturer at Robinson College. He then became a University Lecturer in 1998 and a Reader in 2000. In 2008 he moved back to his old College, Sidney Sussex, in 2008. In 2011 he was appointed to a personal chair and he is now Professor of Modern and Contemporary History.

His research focuses on the social, economic and political history of democracy. He has written on Gladstonian liberalism and the Italian Risorgimento, but Ireland is his main area of research. His British Democracy and Irish Nationalism, 1876-1906 (Cambridge, Cambridge University Press, 2007) examined the way the Irish Home Rule campaigns affected the making of democracy in the two islands. He has recently published (with Daniel Mulhall), The Shaping of Modern Ireland (Dublin, Irish Academic Press, 2016) and he is currently editing (with Mary Daly), The Cambridge Social History of Ireland since 1740 (Cambridge, Cambridge University press, 2016). His current research focuses on the history of religious and ethnic minorities in twentieth-century Ireland, in a comparative perspective. He focuses on the challenge of nation building, the redefinition of ‘public interest’, civil liberties and ‘the constitution’ in deeply divided societies.

Britain and Ireland since the 1860s; Italy in the age of the Risorgimento; democracy, liberalism and republicanism in the nineteenth- and twentieth-century Britain and Ireland. Recently, my work has concentrated on religion and the culture of democracy in the age of Gladstone and Parnell. I am currently writing on religious minorities and civil rights in the making of independent Ireland, 1900-1973.

I have supervised M.Phil. and Ph.D. theses on topics related to the questions of liberty, nationality and political legitimacy. I am interested in civil conflicts - whether ethnic, national or class-based - minorities and the politics of human rights. In recent years my research students have engaged with topics such as J.S.Mill and his circle; Giuseppe Mazzini and his British audience; the nationalism of John O'Leary; Protestant missionaries, free trade and Anglo-Italian relations in the 1860s; church and state relations in Victorian Ireland; British ideas of democracy and the globalization of the Chartist movement in the 1840s; George Dawson and the Victorian civic Gospel; the Highland churches and Scottish land reform in the 1880s; Evangelicalism and politics in twentieth-century Britain; the making Ireland's foreign policy in the 1950s; missionaries, liberals and the codification of Islamic law in the British Empire in 1950s; neo-liberalism and conservatism in the making of the Thatcherite elite; the Workers Educational Association and Democracy. Most recently many of my students have focused on various aspects of Irish history since the Famine. These include the financial background to the Great Famine, children in  public care in post-Famine Ireland, class formation in Cork at the end of the nineteenth century, the officer elite in the Irish regiments before independence, the cultural history of the Easter Rising, the Home Front during the First World War, and Protestant schools after independence.

A research seminar in Modern Irish History, meeting in Sidney Sussex fortnightly, coordinates the interests of many of my students. We hold annual joint graduate conferences with the irish history group at Edinburgh University and we are planning an equivalent vent with the Irish historians at Oxford. he seminar has been running international conferences over the past years, most recently on "The 1916 Easter Rising in a Global Perspective: the Revolution that succeeded?" (https://www.chu.cam.ac.uk/events/1916-easter-rising-conference/)

Nineteenth- and twentieth-century Irish and British history and the history. History of democracy and religion, republicanism and liberalism.