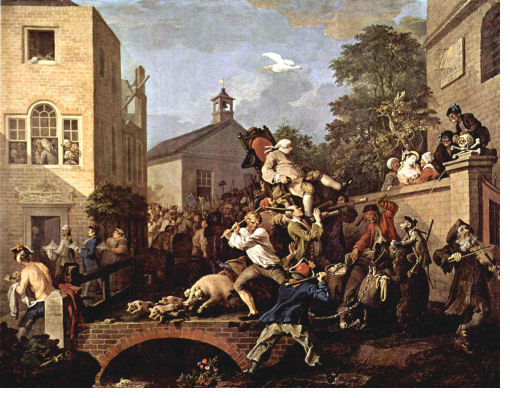 Between 1688 and 1886 Britain was transformed from a small monarchical and aristocratic state into a fledgling democracy, an economic superpower and the world’s most powerful empire. These changes placed an immense strain on existing hierarchies and forms of government: paper 5 takes as its subject the ways in which the distribution of power was challenged, defended and reformed.

The ‘Glorious Revolution’ of 1688 produced not just a new king, but a new kind of constitutional monarchy. Paper 5 examines how that triggered fresh struggles over the powers of the Crown, the functions of parliament, and the role of political parties. The terms of the revolution settlement placed religious inequality at the heart of the state, and struggles for religious liberty are a major theme of the paper. In the wake of the American and French Revolutions, the question of who should be allowed to participate in politics became one of the central problems of the age, giving rise to mass protest movements seeking the vote for men and – even more radically – for women. In the absence of formal political power, those without the vote found ways of exerting their influence through crowds, protests and riots.

Constitutional changes were accompanied by an economic transformation that in the nineteenth century created the most urban society in the world. Urbanization produced new social problems involving policing, public health and housing, all of which required political solutions and challenged traditional conceptions of the role of politics and the state. The industrial revolution also created new commercial and industrial elites, as well as a massive expansion in the number of poor urban workers: each of these groups began to challenge the hegemony of the old aristocratic, monarchical, and clerical regimes.

On the world stage, it was after the Treaty of Utrecht in 1713 that Britain emerged as a global power without ever losing its connections with Europe; the next two centuries would see the First British Empire won and partly lost, and the Second British Empire established. But what was Britain? The unions of England and Wales with Scotland in 1707 and Ireland in 1801 created a new nation state and new forms of national identity. The new polity proved radically unstable, however, as Jacobite rebellions in Scotland and nationalist movements in Ireland demanded fundamental changes to the political order. The Irish problem, in particular, presented British politicians with a set of fundamental challenges to their dominant assumptions about property, religion, local government, and empire.

In explaining how these challenges reshaped British politics, paper 5 examines the making of modern Britain.

This material is intended for current students but will be interesting to prospective students. It is indicative only.