David Washbrook read for his BA in History in Cambridge and received his PhD from this university in 1974.  He won the JRF at Trinity College (1971-1975).  His first faculty position was at the Department of History at Warwick.  In this period, he was a visiting professor at Harvard University (1986-88) and at University of Pennsylvania.  In 1993, he moved to Oxford as a Reader in Indian History.  He was a member of St. Antony’s College, Oxford.  In 1994, he was appointed director of the Center for Indian Studies.  He was also affiliated with the Faculty of Oriental Studies at Oxford.  In 2007, he returned to Cambridge with the prestigious Title B Fellowship at Trinity College.  He continued to maintain his primary residence at Oxford, remained an emeritus member of St. Antony’s and affiliated to Oriental Studies.  He taught in both universities simultaneously for over a decade.

There were two sides to David Washbrook.  In person, he was affable and humorous, ready to chat about anything and everything.  He knew the latest books and often also, if prodded, the latest gossip.  He was understanding of individual foibles, sympathetic with others in their adversity and always ready with a chuckle.  On paper, we met a very different Washbrook.  This voice was razor-sharp, often acerbic, and he wielded words like weapons.  Always on top of his own subject and many others, he was impatient of circumlocution and held on to the highest standards of evidence and argument.  The Washbrook-O’Hanlon-Prakash exchange in Comparative Studies in Society and History in 1992 remains perhaps the most entertaining episode in the historiography of South Asia and read with pleasure year after year by graduate students.  To Washbrook also belongs the distinction of writing a book review that rivalled the book in readership.  His review of Judith Brown’s book on Gandhi, published in Modern Asian Studies (1973) is read alongside the book and is still a must-read for undergraduate students.

In the tributes and reminiscences that are pouring in, almost everyone, his friends, colleagues and students, mention his modesty.  It was very characteristic of David that he wore his laurels lightly.  If you were not a specialist you would not know from casual conversation with him what an important impact he had on South Asian history and how widely his influence has been felt in the discipline.  He was among the pioneers of not one but two major fields in Indian history.  He made a significant contribution to the turn in our understanding of colonial India in the 1970s.  Even while he held an important place in the ‘Cambridge school’ of that period, his writings were distinguished by an engagement with political economy.  Unlike many other historians of the period, he explored questions of inequality, particularly caste and class.  His formulations on caste and labour have been discussed and debated, leading to a flourishing of research in that area.  In the 1980s, he tackled the controversial question of South Asia’s transition to capitalism and was an early participant in the revisionist debates on the eighteenth century.  Along with that of a few distinguished historians, his writings anticipated the ‘global turn’ in South Asian history.

His first two major publications, South India: Political Institutions and Political Change, 1880–1940 (1975) (co-authored with Christopher Baker) and The Emergence of Provincial Politics: The Madras Presidency, 1870–1920 (1976) (based on his PhD dissertation) were on politics in colonial South India.  In three subsequent essays in the next two decades he not only changed our understanding of the economy of colonial India but charted new research agenda: ‘Law, state and agrarian society in colonial India’, which was published in Modern Asian Studies in 1981; ‘Progress and problems: South Asian economic and social history c.1720–1860’ (MAS 1988); and ‘Land and labour in late eighteenth century South India’: the golden age of the pariah’ in 1994 in a volume edited by Peter Robb.  These three essays are now standard text for any course on colonial South Asia.  Many argue on the strength of these that it was as an essayist that Washbrook was most effective.  I read the first two essays as a PhD student and they deeply influenced my own thinking about the field; and it has resonated with countless graduate students for nearly half a century.

In the new millennium, Washbrook developed his arguments in ‘Progress and Problems’ to connect to debates in the ‘global turn’.  His ‘The Indian economy and the British empire’ in the Oxford History of the British Empire (edited by Douglas M. Peers and Nandini Gooptu, 2012), now enormously influential, came in the middle of a spate of essays rethinking the trajectory of South Asian capitalist development.  Offering a critique of World Systems theory and revisioning the significance of South Asia in the global context, he contributed some important essays to the Journal of Global History, of which ‘India in the early modern world economy: modes of production, reproduction and exchange’ (2007) is my own favourite.

He was a member of the Global Economic History Network centred at the London School of Economics and a key figure in expanding the framework of South Asian history to locate India within the Indian Ocean region and the world.  He also emphasised the significance of South Asia for understanding world history. 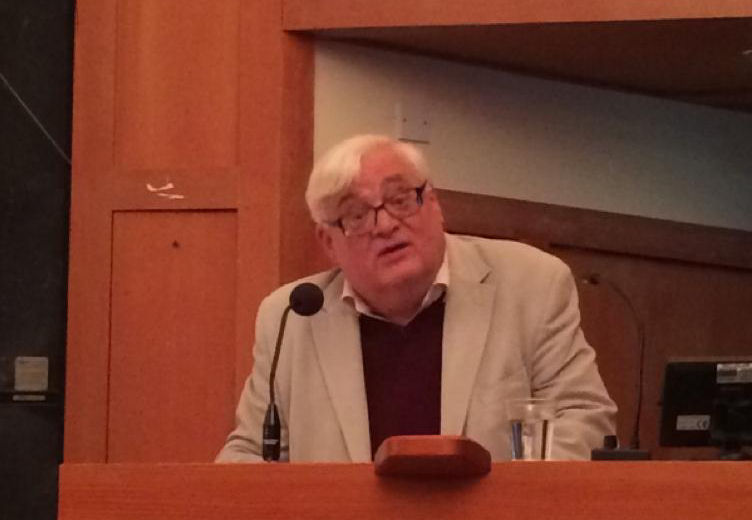 have heard David speak on contemporary issues but in his writings he usually moved back rather than forward from colonial India.  I was intrigued by his turning his hand to a ‘history of the present’ in an essay he contributed to a volume on South Asia in transition from the colonial to the postcolonial edited by Dipesh Chakrabarty et al (2007).  In it he reiterated the case he had made before-- to shift attention from the north, particularly Bengal, to the south and west—but this time for an understanding of post-colonial India: ‘Then, to find a place in the world, India had to become truly post-colonial…. The stage was set for erstwhile marginal regions—which had evaded the heaviest impact of colonialism—-to step forward and release the social and economic energies, which had been pent up but never died within them and which now could carry India forward into the twenty-first century.’  We see in this essay his appreciation of the economic and cultural potential of the southern regions of India and his advocacy of ‘margins’ in South Asian history.  His ‘margins’ came in many forms—regions, caste and class.

Washbrook’s scholarly reputation is exceeded only by his recognition as a teacher.  In Oxford and Cambridge, generations of students have valued the combination of empathy and erudition he brought to his teaching.  As Boria Majumdar says, in his tribute to his doctoral supervisor, very few teachers at Oxford could have been persuaded to supervise a dissertation on cricket history.  The breadth of David’s interests were truly breath-taking, even in the midst of the ‘global turn’.  He served the cause of southern South Asia very well in locating it in the long durée of global history.  David Washbrook emerged as one of the most significant historians of South Asia in our times.  He will be remembered equally as much as a man-- a beloved teacher, a supportive mentor to generations of South Asian historians, and a warmly supportive colleague.