The seminar provides an inter-disciplinary platform for classicists, historians, archaeologists, and theologians working on Late Antiquity.

You can request the Zoom link by emailing dp546@cam.ac.uk or mlj39@cam.ac.uk.

Jesus Goes to China: Early Christian Art outside the World of Christian Hegemony

The birth of Christianity in the Palestinian borderland between the Roman world and the East, initially in a Jewish context but swiftly extending beyond this, is the great religious, historical and art-historical story of Western European culture. And it is almost universally presented as the spread of the religion to the West – especially to Rome. But it should be emphasised that – just as with Judaism and Manichaeism – forms of Christianity spread equally to the East no less than to the West, and arguably at the early stages (before the conversion of Constantine) the patterns of spread for an unofficial cult were similar.  The religion, east of the area of its political hegemony, had extraordinary success – lasting for centuries as a minority faith unsupported by the state and often subject to persecution – and it moved far, both south into India and east deep into China.  This paper explores the archaeological and art historical evidence for that counter-hegemonic move and some gestures of contextual assimilation (literary and visual) for which there is still evidence.

The Conscience of the King: Staging Invective in Synesius of Cyrene’s De regno

Synesius of Cyrene’s De regno, an oration addressed to the eastern emperor Arcadius at the end of the fourth century, is celebrated for its philosophical frankness and complaints about the ruler’s behaviour. In particular, Arcadius is criticised for letting ‘barbarians’ into the Roman army, failing to meet with his soldiers and provincial subjects, and living a cloistered, hedonistic life within his palace at Constantinople. This paper will move beyond these more famous examples of the text’s invective to consider Synesius’ use of the themes of theatricality and false appearances, exploring their place within both the argument of the oration itself and the wider context of the language of imperial criticism in other late-antique literature.

When did Christians start to break up the bodily relics of the saints?

The 'Cult of Saints in Late Antiquity' project has collected almost all the evidence for saintly cult across the entire Christian world up to around AD 700. This paper will explore the early evidence for the dismemberment of the bodies of saints, effected in order to add to the number and the diffusion of their relics. This was a practice that varied according to date, geographical location, and the status of the saint concerned.

You can request the Zoom link by emailing dp546@cam.ac.uk or mlj39@cam.ac.uk.

Augustine of Hippo (354-430) is arguably the most influential early Christian thinker of the Latin West. Some have described Western Theology as consisting of footnotes to his wide-ranging thought, and his powerful stature has remained unabated throughout the centuries. This has often led to him being portrayed as a towering genius whose religiosity is an outstanding model other people have to try to emulate in order to be deemed properly religious themselves, rather than allowing other individuals to develop, and reflect on, their own forms of religious thinking and feeling. A possible consequence of this is a self-perception of one’s own religious experiences as being deficient and less meaningful or valuable than those of the canonical heroes of the Christian faith.

Such a “normative” construction in the case of Augustine falls short of taking sufficiently into account the many ways in which Augustine was an atypical thinker if seen within the context of his own society and culture, with considerable disruptive potential. Moreover, his enormous output of around 5 mio extant words, the largest corpus of any ancient writer that has come down to us, contains omissions, tensions, open confessions as to his own uncertainty, as well as dynamic developments that can be traced throughout his 44-year writing career, all of which resist a homogeneous normative formula to which Augustine can be reduced. Some of these aspects have been hotly, and often inconclusively, debated in scholarship, but others have partly not yet attracted the attention they deserve as to their implications for a modern-day readership. This contribution attempts to sketch some of the striking features of Augustine’s thought that can serve as an invitation to engage in a dynamic conversation with this fascinating interlocutor while avoiding codified readings that are exclusively predetermined by previous meanings ascribed to him.

Thus, this contribution does not plead for a complete abolishment of past thinkers such as Augustine, or of the modes in which he has been read by others, but wishes to demarcate a new way of engaging with his still relevant and stimulating thought.

Banner picture: J.W. Waterhouse - The favourites of the Emperor Honorius 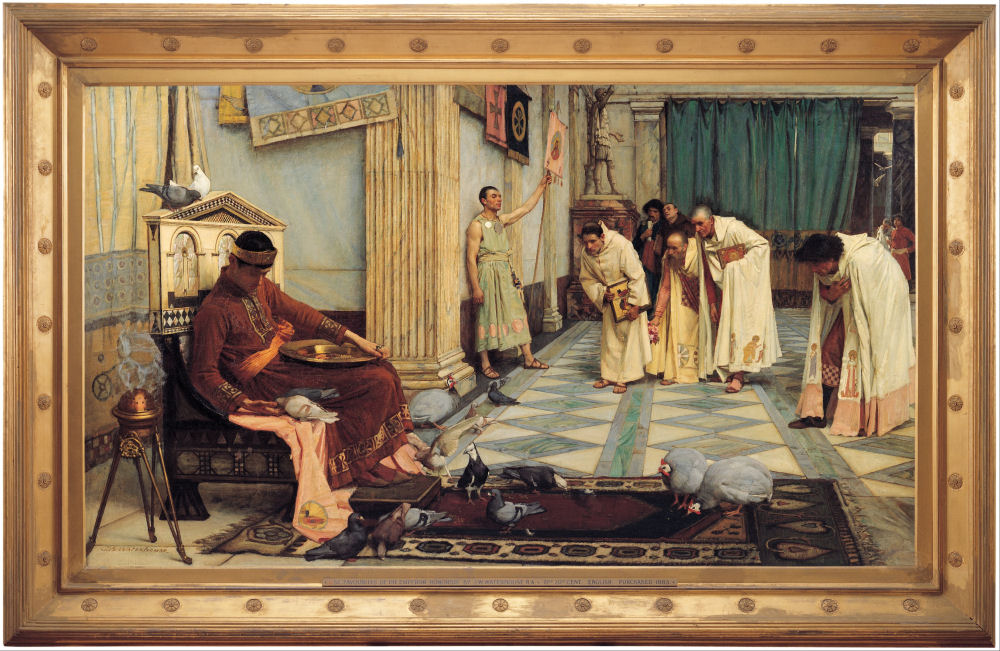